State of the Epicenter 2011

On December 2 and 3, The Joshua Fund held our last board meeting of the year. We reviewed our work in 2011, prayed for our staff and allies and for the peace of Jerusalem, and approved our budget for 2012. We are currently producing and mailing to our donors a year-end report on the kinds of projects we have invested in this year to: 1) educate and mobilize Christians to bless Israel and her neighbors in the name of Jesus; 2) to care for the poor and needy in Israel in real and practical ways, including caring for Holocaust survivors, the elderly, single mothers, orphans and others; and 3) to expand our humanitarian relief operations to care for more people and to stockpile supplies ahead of the next war. Soon, we will post this report online as well.

During our meetings, I briefed the board of directors and senior staff on the "State of the Epicenter" and the geopolitical challenges facing Israel and the Christian community in the epicenter at the moment. What follows is an executive summary of my report. I hope you'll read it and share it with others. I also hope that you'll pray faithfully for our board and staff that we can be faithful to the work that the Lord has called us. And would you prayerfully consider making a generous, year-end, tax deductible donation to The Joshua Fund at this critical time? Thank you so very much.

1.     The geopolitical climate in the epicenter deteriorated significantly in 2011, as has religious freedom in most of the Arab and Persian world.

3.     In light of these sobering realities, The Joshua Fundmust remain focused on executing our “Operation Epicenter” strategy as we “pray for peace, but prepare for war.”

Here are some Scriptures we need to keep in mind during this coming year:

Thanks so much for your faithful prayers and generous financial support, especially given how challenging the economy is right now. We are so grateful to the Lord for you, and we ask the Lord to bless you and your family as you bless Israel and her neighbors in the name of Jesus. 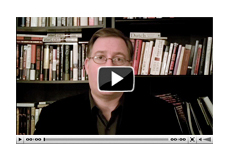 Why is the Iranian Regime so desperate to get nuclear weapons? Joel C. Rosenberg discusses the difference between Radical and Apocalyptic Islamism.

Are Iranian leaders planning a Second Holocaust against Israel if they acquire nuclear weapons?

Israel faces many threats, perhaps none more significant than the nation of Iran. The Iranian leadership has vowed to annihilate Israel, but the regime is steadily losing the support of its people.

Sign up to receive prayer requests, newsletters and updates from The Joshua Fund.